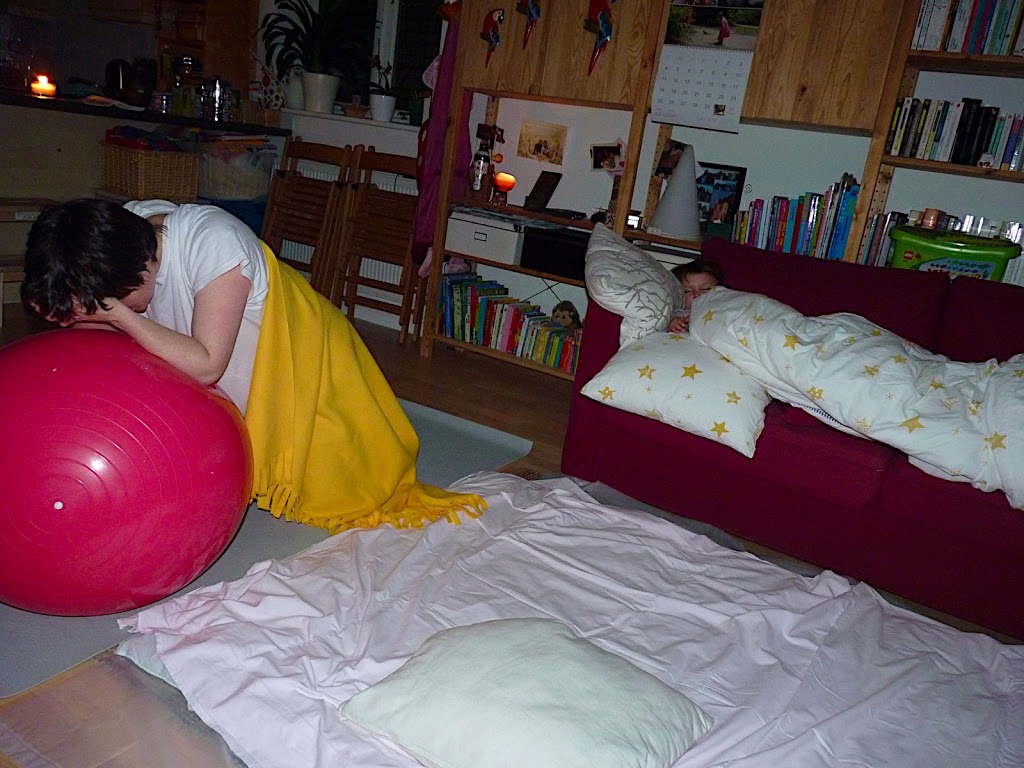 All started on Friday 29th October at 21:00 when my water broke. We were having dinner; I was sitting on my chair when suddenly Louisa said “Oh Maman, you’re doing a wee!”. The surges started no longer after but we first finished our dinner, set up the environment for the birth and text our Doula Sam and midwife Gillian. I listened to the relaxation music and sat on my gym ball while feeling gentle waves in my bottom back. Alan was doing light touch massage and deep breathing were working well to go through the surges. 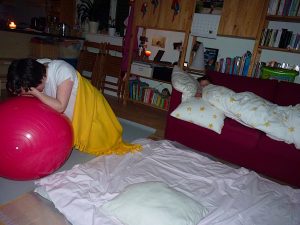 Around 02:00, Sam and the midwives arrived. Louisa was with us, trying to sleep on the sofa while being on all four. But surges were not as regular as we wished, labour was taking longer than everybody expected and at 06:00 I gave my consent for my first and last vaginal examination: 3cm, not in established labour! I was surely disappointed and felt really bad to have called every body for nothing…
Sam and the midwives went back home, and we tried to get some rest on our inflatable mattress laid in our living room with Louisa. The relaxation music was playing in the background and the aromatherapy candle and diffuser with clary sage and lavender were spreading a familiar and calming smell.
Getting some rest while lying on the side was indeed quite difficult during surges, so I decided to find a better spot and used my gym ball and a pillow over my desk as I was unable to stay longer on all four. Alan was doing a brilliant job: getting me some nice food – specially his wonderful home made brioche with Nutella – massaging my back during surges, and telling positive words regarding the birth. Those positive words have been for me one of the most important aspects of HypnoBirthing, and Alan managed to tailor made them on the spot just when I was asking them and needed the most. It was simply marvelous. Thanks Alan! He cooked pasta for lunch to feed the family.
Gillian came back at 14:00 for a home visit, and checked the position of our baby. Baby was back to back, that gave us a probably good reason why we needed more time to birth our baby. We discussed a plan of action: rest as much as possible and set up the pool to relax. The surges were still not regular, so at 14:45 Gillian decided to leave us and said that she will not come back, we could call her again but if midwives were needed it would be better to call the delivery unit. Alan started to set up the pool and put water as it took more than an hour to fill it up. 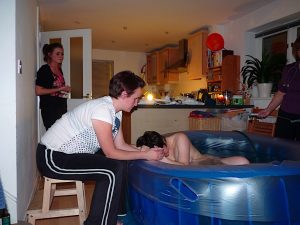 I entered into the birth pool around 16:30, and it was amazingly relaxing to be in the warm water. I could rest a bit while being on my knees and supported by the pool’s border. About two hours later, surges were getting very regular and more intense. Alan called the delivery unit to request a midwife, and Ailsa arrived at home at 18:40. Sam arrived at 19:00 and gave me her hand to go over each surge while getting some back massage. I did get out of the pool to go to the toilet, but it was quite difficult to be outside the warm water and walk while having very regular and close surges. I managed to come back to the pool. I felt that baby was coming and I managed to become suddenly much more focus on the birth of my baby and relaxed. My baby’s head went down slowly with each surge. It was simply wonderful. Baby was born at 21:04 in water and at home. We stayed in the pool few minutes while I discovered that our baby was a girl! Welcome Emily! I then got out of the pool with Emily still attached to me to lie on the inflatable bed waiting for the placenta to come, and move to all four.

I cut Emily’s umbilical cord as it was not pulsating anymore and went to the toilet to try to get the placenta out but without success. My bladder was full but I did not managed to wee, so Ailsa offered to place a catheter that I firstly refused and then accepted. She gave me time to think of it and it was great that nothing was rushed, as I was not bleeding, there was no emergency. I tried again to push out the placenta without success. After examination of my tummy, Ailsa felt that the placenta was on its way down but she wanted to be able to pull more on the cord to get it out, and the only way to do so was to give me the injection that I firstly did not want. But after having time again to think it over twice, I decided to go for the Syntometrine injection, and had Ailsa pulled on the cord while pushing out the placenta. It went out very well, the placenta came out and we were all very happy to be sure to stay at home all together! 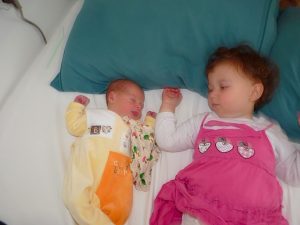 It took me more time than expected to write Emily’s birth story, I just wanted to enjoy my baby moon and appreciate this so wanted dreamed home water birth! Thanks again to everybody who helped us to achieve it!

This site uses Akismet to reduce spam. Learn how your comment data is processed.